It’s been two and a half weeks since my last blog and frankly, it has been an interesting time. Most of it goes by in a blur because you see so many things and get so many impressions that it’s insane to keep up. Nevertheless, after I met with Rubing on the 21st, I retired to my room for much needed air conditioning and ended up sleeping semi-okay for that night. That is, assuming you could sleep with 31C during the night. Below is a graph of the temperatures and you have to imagine that the entire week the humidity was above 80%. 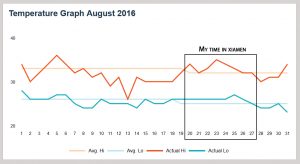 Needless to say, it was so hot that it felt like Daenerys and her dragons were toasting lamb next to you. On monday I woke up and felt like hell. I had been sleeping terrible and the heat was killing me so instead of heading out for the day I took it slow and slept some more untill I woke up around 15:00. I had already talked to Mina to meet her in the city after not seeing her for five years. So when she finished work, I picked her up at her place and we went to a small Korean restaurant in the city, where we had some Bibimbap together. It was really nice to see her again. 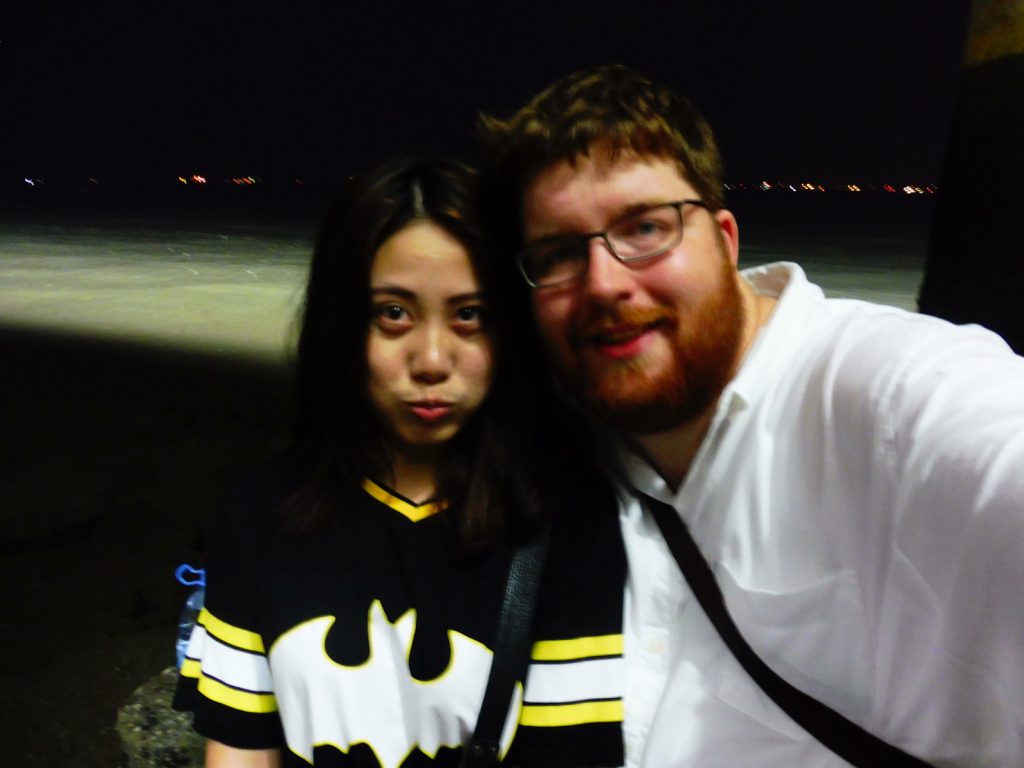 We went for a great walk along the beach and caught up on a long time of not seeing eachother. It’s definitely good to see old friends like that and I miss them dearly. Most of the guys here already moved to other cities and as a result you’d end up with a lot of pictures where I am hanging out with my female friends. Ah well, such is life! After hugging Mina goodnight I retired to my hotel to get a shower and rest. It was still balls busting hot, so I went to bed early.

I was still dealing with the immense heat compared to my hometown and started off in my hotel. I had no plans made on that day to visit friends, so I decided to go for a walk in the Bailuzhou Park. Many of the pictures can be found in my previous posts, but I did record a short video for you all to see.

After meeting some other friends it turned into Friday real quick and I planned to meet with Miya for lunch. Five years ago, my friend Resa introduced me to Miya but due to bad timing we weren’t able to hang out in Xiamen before I left. That said, we did build a close friendship and on the 26th we finally met at a hotel near Gulangyu. I arrived first and eventually got a text from her that she was waiting in her car but had to find a parking spot. I found her car, stepped in and was suprised what such a short girl did in a big car like that. I even had enough room for my feet AND my head, so that was a major suprise. We found ourselves a parking spot and then went to the hotel for Dimsum. As this was the first time I had dimsum and it also was in a city famed for it’s seafood, I was a little apprehensive. Most of our dishes were great to eat, but Miya decided to buy one local delicacy called “Sea Worm Jelly”.

Yes, you heard that right. Sea WORM jelly. It is as disgusting as it sounds. I failed to take pictures of the whole thing but imagine it looking like this:

I am very proud to say that I didn’t splatter the entire meal with the contents of my intestines over it, but I’ll never eat that again. Meanwhile Miya’s eating it like candy and keeps insisting that I try to eat more of it. BLEH. Haha, luckily the rest of the food was very tasty so that made up for it. But I think my stomach still hated me for a good week after that when I moved to Taipei.

I am struggling to put all the stories into one blog because there are both a lot of memories and not everything is as interesting to tell for the public. That said, I am going to post a video later with a compilation of pictures. Most of them have been posted already but it’ll be nice to have regardless.